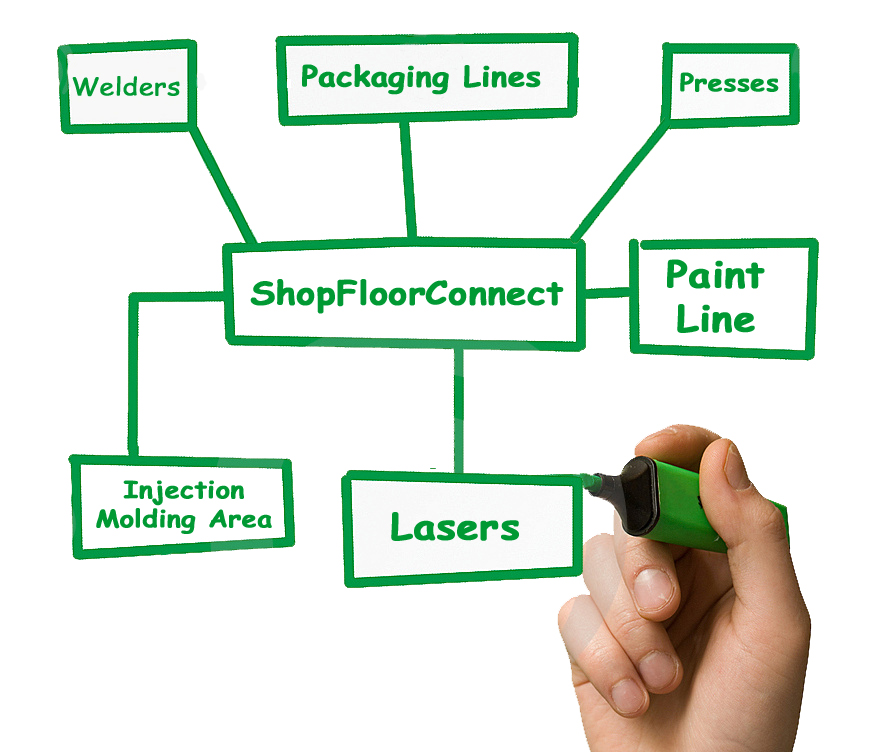 Everybody says that collecting shop floor data is important, but many companies are still stuck with a manual entry system that’s inefficient and biased.

In many cases, machine operators make notes on a notepad about their machines’ uptime and production, which they then transfer to whiteboards positioned around the shop floor. Another employee comes along later to write down all the information from the whiteboards, which is finally input into a database. The collected information is then shared with the shop floor days later, too late to do any real good. Making matters worse, bias often inadvertently creeps into the reports, as machine operators are asked to provide details on their own performance.

ShopFloorConnect production tracking software avoids all these problems by automatically recording each machines’ throughput and efficiency without delays and without bias, generating powerful, real-time reports.

Which sounds great, but what does it really mean in practice?

A metal fabricator also was able to achieve significant labor-savings using ShopFloorConnect, despite the fact it operates a wide range of different types of machinery, like welders, laser cutters, press brakes and stamping machines. Even though each type of machinery has its own requirements, the same ShopFloorConnect machine interface is used to record data consistently for all the equipment. This simplified cross-training for the fabricators’ employees, allowing all the operators the same easy access to data recording across all the different kinds of machinery.

Because ShopFloorConnect production tracking software provides such a wealth of in-depth, real-time information, a manufacturer of institutional washers and dryers was able to use its ShopFloorConnect reports to prioritize the replacement and upgrade of its production equipment.

Our detailed reports also helped smooth out operations for a highly vertically integrated garbage disposal manufacturer, which operates all its own processes, including die casting, finishing and assembly, all the way down to making the motors for its products. Because ShopFloorConnect provides real-time, second-by-second updates on each process, the manufacturer was able to improve interdepartmental communications – each step of the operation was better prepared because it knew what was coming next and when.

Another great example of ShopFloorConnect’s benefits is the experience of a house key manufacturer in North Carolina, which doubled its output by using our software to identify bottlenecks. After ShopFloorConnect was installed, the company realized that its stamping operation was creating keys at 2,000 parts per minute for a few hours every day to fulfill its requirement of making 480 keys per minute. The large volume of parts was too much for downstream processes to manage, creating logjams in the manufacturing process. The company was able to demonstrate to its stamping operation the importance of a lower, more consistent output and boosted its production to 300,000 keys per day.

Metal fabricators aren’t the only manufacturers to benefit from using ShopFloorConnect. Plastics packagers, pharmaceutical companies, a roof rack manufacturer and even a plastic cup maker all improved their processes by using our software to monitor their production.

A common problem across industries, even for the most well-run plants, is the inevitable occurrence of a catastrophe of some kind, say a machine breaks down or there’s a material shortage. The length of downtime depends on how quickly that catastrophe is addressed. ShopFloorConnect helps shorten that downtime by providing real-time alerts to the appropriate maintenance person or stocker, helping ensure the right response in a timely fashion. As an added incentive, ShopFloorConnect escalates the alerts to supervisors if action isn’t taken within a specified amount of time.

Even after a manufacturer has used ShopFloorConnect to wring every efficiency out of its operation, the alert system continues to pay dividends by keeping production on track and on time.

We have years of experience helping manufacturers get the most out of their production cycles. Contact us today for the production tracking software your operation needs.